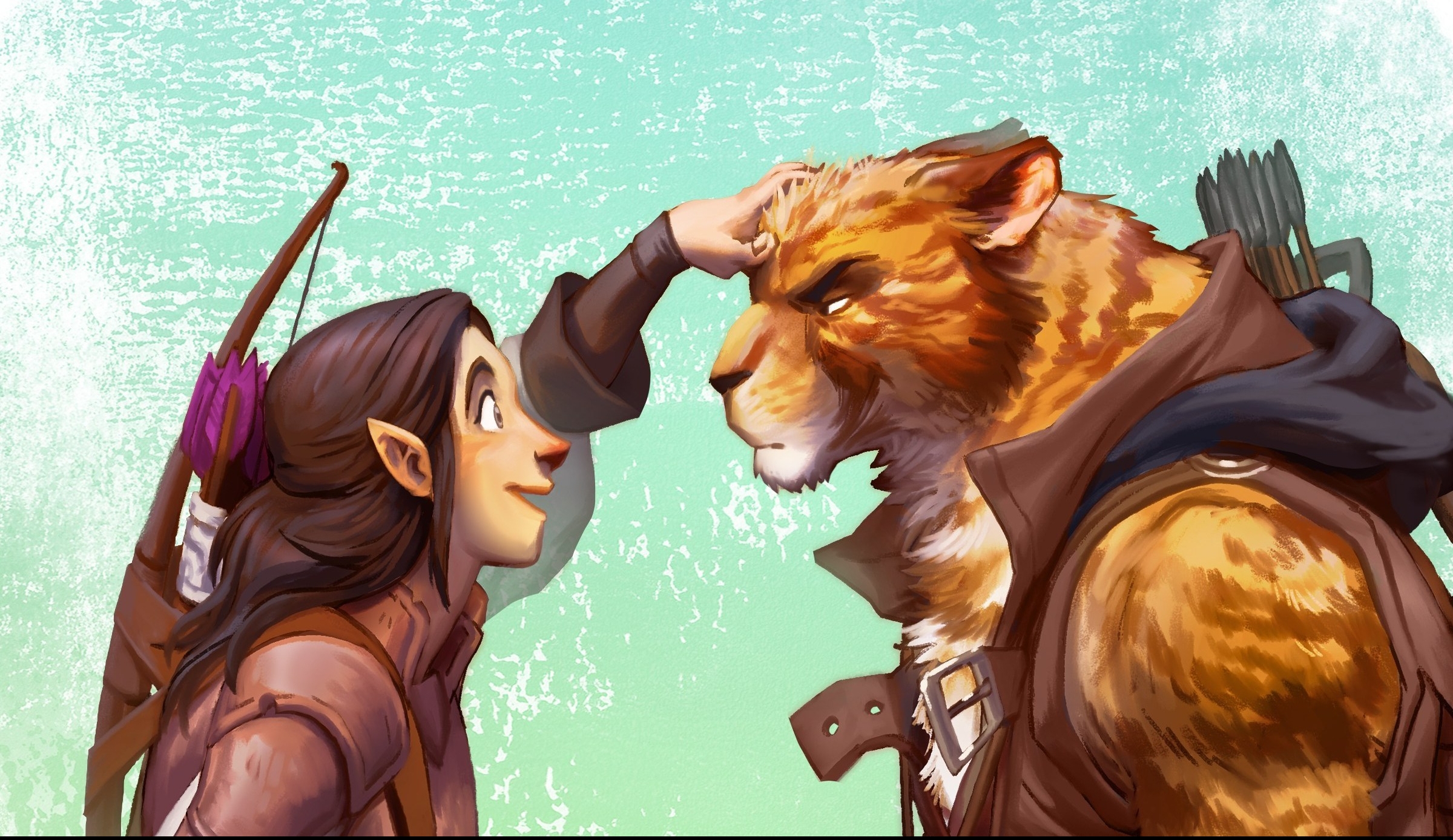 Most of our cast met one another during the events of Lost Mine of Phandelver from the excellent D&D Starter Set.  Now embarking on a new adventure, they have met up again in the town of Greenest, with a few new faces joining the party…

“The souls of the Eighth guide my steps.”

Aleph is actually an acronym: it stands for Artillery, Light—Eighth Phalanx.  Aleph is a Warforged, a sentient but constructed being built in the distant realm of Eberron.  He came to the Forgotten Realms through a portal when his home, the Free City of Emberfrost, was evacuated to escape an invasion.  On that terrible day, the Thirteen Phalanxes of Emberfrost fought to defend the citizenry as they made their escape.  Of the whole of the Eighth, Aleph was the only survivor.

Now a soldier without an army, Aleph fights to honour the memory of his fallen brothers by championing the just and defending the innocent.  Meanwhile, he searches for survivors from the other Phalanxes, desperate for a way to return to his forsaken homeland.

“Less of the pro-bono heroing, please—some of us are trying to make a living here!”

Cyd is an adventurer born and bred.  Her father was Sid the Sod, a legendary rogue of uncertain parentage, who retired with a fortune in ill-gotten gains to raise racing chickens on a quiet farmstead.  Though The Sod’s adventuring days are far behind him, he has passed on his love of both animals and filthy lucre to Cyd the younger, and she is determined to follow in his footsteps.  Now an aspiring young rogue herself, Cyd and her pet tressym, Fevvers, have come to Greenest following reports of a mysterious group who are abducting magical creatures.

“I believe that gelatinous cube is preparing to engulf us—absolutely fascinating.”

Gerard is a monk of Oghma, the god of knowledge.  Incurably curious—even when it might just kill him—Gerard left his monastery because he believes that he has a duty to use his knowledge for the betterment of mankind.  Recently, that sacred duty has brought him into conflict with the nefarious Cult of the Dragon, an evil cult who worship Tiamat.

“So if I’m not holding my Bag of Holding… is it just a bag?”

Nubbins is small, but don’t let that fool you!  His gloves of giant strength mean that what this tiny gnome lacks in stature, wisdom and basic common sense, he more than makes up for in punching power.  Nubbins is a bard-come-wizard who works for the Neverwinter College of Enchanters as Chief Archaeologist.  What this means in practice is that he is rarely in residence, instead gallivanting all over the Forgotten Realms in search of rare magical treasures.  He’s currently in Greenest looking for a Dragon Mask, one of the mythical masks of power said to grant their wearers the abilities of the dragons.

“My name is Atone; that is also my mission.”

Atone, the newest addition to the party, joined the group after a chance encounter during the Siege of Greenest. A tiefling who struggles with both the curse that afflicts his race, and his own dark past, Atone’s greatest desire is to—well—atone for both sins. While he first sought to achieve this through a life of meditation and penitence in a secluded elven monastery, he has since decided that the best way to expiate his crimes is to put his martial arts training to good use by righting wrongs. Earnest, solemn, and frustratingly literal-minded, Atone applies the same focus and dedication to his hero work as he does to his meditation—but a lot more violence.

“The dragon demands a human sacrifice.  We have two human prisoners.  I don’t see what the problem is here.”

Wordweaver is the team’s Warlock, a goliath in service to the mad god Be’he’quin.  Cheerfully amoral, Wordweaver is only here because of his side gig as the spymaster of Phandolin, a role he picked up during the events of Lost Mine.  His director of spies, Halia Thornton, has sent him to Greenest to find out what he can about the Cult of the Dragon, whose activities threaten the whole of Faerun.  He’s also on the trail of the evil wizard Glasstaff, an old foe from Phandolin who narrowly eluded capture at his hands.  Wordweaver may not have much of a conscience, but he always pays his debts, and Glasstaff has just come due for a world of hurt.

Wordweaver is accompanied on his travels by his trusty familiar, Impy Tailstinger Galoranathi.  Yes, Impy is an Imp.  No, Wordweaver is not very good at naming things.

Spoilers below (highlight to read):

Wordweaver was killed during the siege of Greenest, when the party were caught in an ambush laid by Glasstaff, his arch nemesis. Since his death, his place in the party has been taken by the tiefling monk Atone. Meanwhile, the goliath wanders in limbo, unsure what his dark patron has in store for him in the afterlife.

“Ah, this takes me back to my days on the force… Of course, back then if we confiscated halfling pipeweed, we weren’t supposed to smoke it.”

An elven fighter, Minerva had a long career as a guardswoman before deciding to try out the adventuring life at a more mature age.  One might imagine that her advanced years and wealth of experience would make Minerva a wise, mature and sensitive soul.  One would be wrong.